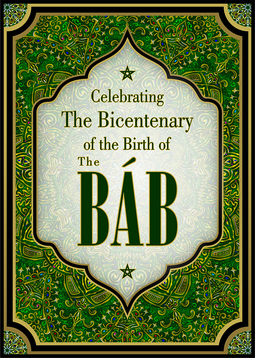 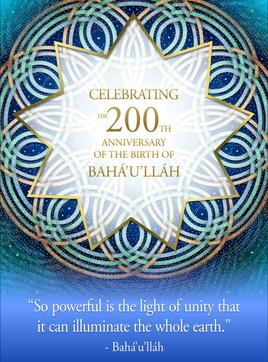 Bahá’u’lláh (1817-1892) was a spiritual teacher Who announced in 1863 that He was the bearer of a new revelation from God. His teachings have spread around the world, forming the basis of a process of social transformation and community building which is unique in its global scope and the diversity of participants.

The Báb (1819-1850) was the Herald of the Bahá’í Faith. In the middle of the 19th century—one of the most turbulent periods in the world’s history—a young merchant announced that He was the bearer of a message destined to transform the life of humanity. At a time when His country, Iran, was undergoing widespread moral breakdown, His message aroused excitement and hope among all classes, rapidly attracting thousands of followers. He took the name “The Báb”, meaning “the Gate” in Arabic.

With His call for spiritual and moral reformation, and His attention to improving the position of women and the lot of the poor, the Báb’s prescription for spiritual renewal was revolutionary. At the same time, He founded a distinct, independent religion of His own, inspiring His followers to transform their lives and carry out great acts of heroism.

The Báb announced that humanity stood at the threshold of a new era. His mission, which was to last only six years, was to prepare the way for the coming of a Manifestation of God Who would usher in the age of peace and justice promised in all the world’s religions: Bahá’u’lláh.

This is a celebration of the transformative impact of Bahá’u’lláh’s teachings on the lives of families, neighborhoods and communities around the country and the world. Bahá’u’lláh’s vision of the oneness of humanity is an antidote to the racial prejudice and materialism that are corroding American society.

Now more than ever we need positive models of social change that bring people together rather than divide them. This is what we will now be celebrating in the months leading up to the 200th anniversary of the Báb's birth in October.

These celebrations are not merely an event but a series of activities generated at the grassroots level all around the world, which reinforce Bahá’u’lláh’s vision of the oneness of humanity.​